Happy 2016 everyone! With another year gone, it’s time to reflect on our mistakes, look forward to our hopes, plan for our dreams and make new resolutions! Let’s take this space to really go deep and discuss what kind of a world we want to make in this new year.

Fuck it, I lied. It’s anime recap time, what you gonna do?

The year in Anime!

With so many new anime series coming out, it can be hard to decide which ones actually deserve your time. Now with Crunchyroll and Hulu both offering current anime series and simulcasts, it’s easier than ever to drown oneself in moe-blobs and high-school romantic comedies.

There have been some actually good series this year, and I’m gonna tell you about them. Bear in mind, this list only deals with anime series that were airing during 2015. Some of them started in 2014 and others only aired in this last year. It is by no means a list of THE BEST ANIMU, but of the ones that came out this last year that I feel are worth your time.

In no particular order (because, let’s face it: top ten lists are for scrubs), these are my must watch animes of 2015:

Okay, this one is kind of a no-brainer. This series is so good, it got its own Hypeway to The Dangerzone article (which is here).

This year saw the culmination of the third JoJo’s arc, and it was announced a few weeks ago that arc four would be getting an adaptation sometime this year. Meaning that if you are new to the series, you have plenty of time to get caught up. 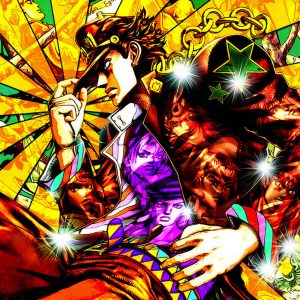 With arc four on the way, and the latest JoJo’s fighting game getting a western release, it’s a good time to be a JoJo’s fan.

I Can’t Understand What My Husband is Saying

This adorable series follows the daily exploits of an office worker and her younger, otaku husband. This is one of those little interstitial series, meaning each episode is only about 4 minutes long.

What makes this series so good is the interplay between these two characters and the utterly real relationship moments. Its cute, down to earth, funny and completely relatable.

In the future, Japan has become an Orwelliean nightmare where perversion is a crime. Everyone wears monitoring devices, 24/7, and an entire generation of children has grown up being sheltered, too pure cinnamon buns.

It’s silly, perverted fun that really kicks into gear once one of those sheltered girls goes full on Yandere. If you’ve seen any of those “Love Nectar” memes floating around the internet, this is where it comes from.

A mouthwatering cooking battle series where the only thing more delicious than the food are the girls!

Seriously though, its a shonen cooking series. The main character is basically a cooking super Sayajin. Soma has been raised to be a cook from childhood by his Father, and has spent his entire life cooking and helping the family diner. When his dad closes the restaurant to go to America, Soma is enrolled in the most elite culinary school in Japan, where disputes are settled with cook-offs (Shokugeki).

Will Soma gain the skills and know how to survive in a school where only the top 10% graduate and defeat his father? Will Nakiri Erina ever show the “dere” side of her tsundere nature? Find out in Food Wars!

Note: DO NOT WATCH BEFORE GOING GROCERY SHOPPING. I cannot stress this enough. You will want to go buy ingredients and practice cooking gourmet cuisine.

A new animated series by the creator of Case Closed/Detective Conan, Magic Kaito takes place in the same universe (Case Closed characters actually make an appearance in several episodes) but switches the perspective around.

Instead of following the diminutive super sleuth, our main character this time is the magician Kaito, following in his father’s footsteps as a phantom thief. The main character is kind of a dick, which is a refreshing change of pace, and the schemes are well thought out. I only wish it kept going, as the end doesn’t satisfactorily wrap things up.

Okay, okay: yes it’s a harem anime. Yes it’s a romantic comedy, just hear me out on this one:

Anyone who claims otherwise is either in denial or trying to push their own, slime-girl-focused agenda. The plot is basically this: It is revealed to the world that mythological creatures are real, and have been living in secret, protected by world governments up to this point. In order to acclimatize people (and monster-people) to each other, a home-stay program is created called “The Interspecies Cultural Exchange Act”.

Three years later, enter Darling-kun: an out of work single guy who gets an adorable, affectionate Lamia named Miia dropped into his lap by an irresponsible government worker. Can Darling-kun keep his chastity intact, or are we on the road to an international incident?

The series keeps introducing new characters, which keeps things fresh, and by the end of the anime all the primary girls have been introduced (the story continues in the manga, though there have been hints of a second season possibly coming out).

Fucking ANIME OF THE YEAR OVER HERE.

One Punch Man started its life as a webcomic, got picked up by Jump and finally got an anime adaptation. The story focuses around Saitama, a hero for fun. When our story begins he has spent the last three years training himself to become the strongest hero ever. Which he has. He trained so hard he went bald and can now defeat any enemy with a single punch. Now he’s living in a ghost town and has become bored with the lack of challenge.

What makes this series so good is how self-aware it is. It knows what it is and hits all of the shonen/action/fighting tropes as though going through a checklist. DBZ-esque bad guy? Check. Evolution-obsessed mad scientist? Check. Rampaging giant monster (Kaiju)? Check.

It switches between utter “badassery” and comedy at the drop of a hat, and both are supremely well done. MadHouse has brought their absolute A game here.

Everything is well animated, the switch in style between comedy and action is both visual as well as thematic, and it is impossible to watch the opening animation without getting HYPE AS SHIT.

Yamada-Kuin and the Seven Witches

Another romantic series, but I hesitate to call it a comedy. If you’re tired of the traditional rom-com blue balling, this is a series to take a look at.

The primary couple get further in the FIRST EPISODE than most rom-coms get over their entire run. Hell, they even ACTUALLY START DATING BEFORE THE FINAL EPISODE. That, ladies and gentlemen is what we call progress.

Basically at this high-school there are seven women who inherit special powers based on their own particular circumstances. So the girl who has trouble talking to others gains the power of telepathy. The one who wants to amass influence gains the power to charm people. These powers are passed down every time one of them graduates and our main character enters this when he accidentally runs into the girl with the power to swap bodies.

Kind of a weird one here.

While he’s at it he’ll uncover his roommates secrets and trauma, struggle against a secret organization and other ghosts who are trying to force their own timeline-specific agendas. Its one of those series you need to watch twice to try and keep a hold of all the different story threads going on here. Its very strange, a little confusing but ultimately worthwhile, so give it a shot!

Finishing off our list is the second season of Nisekoi, a light-hearted twist on Romeo and Juliet where Romeo and Juliet are forced to pretend to be dating by their Yakuza crime lord fathers in an effort to stave-off a full-scale gang war.

Its all wrapped up in this mystery from the hero’s past, with a locket and a promise to a girl (whose identity he has forgotten) and beautifully animated by SHAFT, one of my favorite animation studios. Interesting characters (Onadera is OnADORABLE), good art design and some genuinely touching moments make for a fantastic watch.

An enjoyable show about a man with no poker-face who must keep the fact that the girl he loves is a vampire under-wraps. He also totally botches his confession too. While the anime is okay, the manga is much better, hence its inclusion here.

Owari deals with Araragi’s past (before the fateful Spring Break that turned him into a somewhat vampire and roped him into dealing with aberrations) and gives us some needed insight into who he was before things got weird.

Another artful series by SHAFT, if you have seen all the prior Bakemonogatari series you will OF COURSE watch this one too. If you haven’t, then THIS IS NOT THE PLACE TO START. Go watch Bakemonogatari first, see if its your speed and then come back to this once you’ve finished everything else.

Worth a look if you’re a fan of AoT/SnK, otherwise there’s no reason for this series to be exist. I know that sounds harsh, but its true. This series is basically just fan service, though if you’re having trouble coping with the feels/emotions/trauma of AoT/SnK then watching this on the side at the same time is not a bad idea.

4chan hates her, because she is them. And there is nothing 4chan hates more than itself.

Adorable ship girls. For a game based tie-in series, there was actually a lot more here than I was expecting. It has some serious moments and watching an anime deal with video-game mechanics is pretty hilarious.

Not entirely my cup of tea, but worth a try. If you have PLAYED Kantei Collection, then this is definitely a series you should watch. For everyone else, the closest metaphor I can come up with is this: Think of this as XCOM: the Animated Series.

YuruYuri is one of my favorite series ever and, while I am always happy to have more of it, this season was kind of a let down. Lacking some of the over-the-top gags and meta humor that made the series so charming, this season is just kind of average by comparison. I definitely recommend watching the series (starting with season 1), but this season just isn’t as good as seasons 1 and 2.

There you have it folks: my must watch list for anime from the past year. I’ve probably missed a few, some of which I may not be aware of or have seen, so please leave your recommendations in the comments down below. All of these series are available either through CrunchyRoll or Hulu (many are available on both).