WARNING: This should be fairly obvious based on the title of the post, but there will be spoilers to the ending of the Krampus movie (2015)

So I just got back from watching the new movie Krampus, which I thought to be a fun horror/comedy with a lot in common to classic 80s family horror. When I reflect on the happenings of Krampus, I can’t help but think of tales like Gremlins and Tremors.

I loved the “gotcha” at the end of Krampus.

As a viewer, we are led to believe that the terrible happenings of the last two days before Christmas were all a dream. Similar to stories like “A Christmas Carol,” the main character Max wakes up. Everything appeared to be a dream, and the boy is determined to make things right with the family. 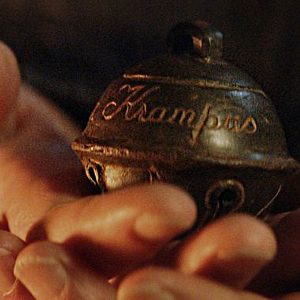 What happens next is unexpected. As the children go to open their gifts from “Santa,” Max opens one of his to reveal the infamous Krampus bauble, which is the symbol (previously mentioned in the movie) suggesting that Krampus has visited and killed your family.

The entire family stops what they are doing to look at the bauble uneasily. After the initial shock sets in, the entire family looks out the window as the camera zooms out to reveal the family house inside of a snow globe, which is being placed on a shelf by Krampus. Many other snow globes, showing other houses, are on the shelf next to their’s.

A further zoom reveals a hot and smoky workplace. The minions of Krampus jump at the screen, ending the movie.

While I believe the ending is open to interpretation, I went and saw this movie with some friends, who had different takes as to the end of the movie. I will list my take and some other takes I had heard below:

It was all a dream

This is my least favorite take, as I hate the lazy “it was all a dream” trope. This ending suggests that even the happenings in the snow globe are a dream and that the movie is just having fun.

Perhaps the character will wake up again on Christmas day to a totally normal scene. 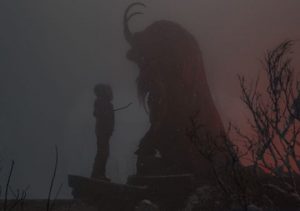 They are all being watched by Krampus

This is what I thought the ending was when I first saw the movie, before consulting friends. At the time it seemed obvious to me.

The family simply forgot the events of the past two days and are enjoying Christmas day. They all seemed incredibly happy to be together and see each other, something that was not evident in the initial visit. When Max opens the gift, it is a reminder to the family that they are being watched.

If they are not careful and warm, Krampus will come back, and this time, he might not have as much mercy.

They are in Hell

This is my favorite ending idea, submitted to me by a friend, who also thought that his version of the ending was obvious.

In this idea, the family must live the events of Christmas over and over again, restricted to their house as the only place to go… forever…

I like this ending because it is feasible and is also very different from the traditional happy ending. The family committed a sin against Christmas and is paying in Hell.

What do you think of the Krampus ending?

I want to know what you think about the ending of Krampus. Do you believe in one of the above theories? If so, why is that?

Is there a different theory that you have beyond what is listed here?