Fallout 4 just released for the Playstation 4, Xbox One, and PC. Find out how we feel about the changes made to the existing formula. Is Fallout 4 worth a purchase? Find out what we know so far.

If you didn’t want to watch the above video, here is a rundown on what has changed in Fallout 4 and whether we think it is a good or bad thing.

I don’t know how, but I named Fallout 3 one of my favorite games of this generation, and I didn’t even enjoy the base gameplay. It was that immersive of an experience and the fun of exploring and uncovering the story were enough to move Fallout 3 above the imitators. I actually cared about what I was experiencing.

While I still love the world here (hell, I LIVE in Boston), now I also have gameplay to be get me through the game’s story.

Shooting is actually fun in Fallout 4

In an interview, it was discovered that the team at Bethesda modeled their gunplay after the recently released Destiny game. I was jazzed when I heard this.

Having personally loved the gunplay of Destiny enough to play for 10s of hours (a feat for this time-starved gaming veteran), I wanted so badly to sink a wasteland-ian rifle stock in my virtual armpit and fire at the irradiated beasts of the Commonwealth.

I was not disappointed.

Fallout 4 has inspired gunplay with good iron sights aiming and fast shooting. Your aim is STILL dictated by your Perception stat, but I had it cranked to 10 (my character is a sniper) so I was too busy blowing the heads off Raiders to notice.

VATS is frenetic this time

If shooting is too fast, you can always move to VATS (Vault-Tec Assisted Targeting System) which was introduced in Fallout 3

A “problem” I had with Fallout 3’s VATS (Vault-Tec Assisted Targeting System) is that it was too easy. I put “problem” in quotations because it froze the game to allow for strategic thought. In Fallout 4, VATS slows down the action, but does not stop it.

In the video above, you will watch me get killed by Feral Ghouls that are frantically chasing me while trying to get a grasp on the new VATS system. It’s fun and creates a challenge.

On that note, Fallout 4 is hard, even on Normal difficulty.

Normally I am not a fan of hard games, but in a devastated landscape with hundreds of years of destruction and gang warfare and nasty creatures, I want to feel helpless. While I am certainly still close to the start of the game, it is not an option to simply run around the wasteland willy nilly.

An encounter near the beginning of the game, where you first get exposure to power armor, had me shaking in my boots, even WITH 150 lbs of metal surrounding my body.

Fallout 4 makes you feel like the naive warrior that you truly are. 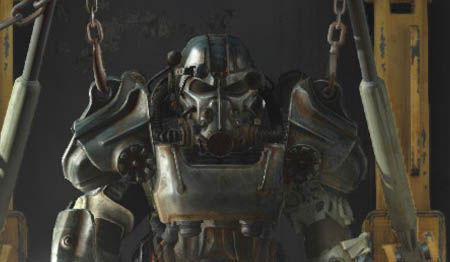 Fallout 4 doesn’t introduce a lot of new mechanics to the game, rather, it takes existing mechanics and streamlines them a bit.

Number-crunching Dungeons & Dragons fanatics may not like the changes, but I for one welcomed them. Less bars and status effects to worry about and more fun to be had.

Radiation no longer owns its own separate warning bar. Instead, radiation creeps into the right side of your health bar — growing bigger as you take in the poison.

This is a great trade-off and actually makes radiation a real problem. Crossing the Charles River requires actual thought. What if I get to other side and get mauled by a Deathclaw? If you couldn’t tell, I love this tweak.

Rather than have bunch of skills that can be leveled up with points to 100 (ie. Science, Lockpicking, etc), Fallout 4 simplifies your selection choices by assigning these skills to SPECIAL traits. When you level up, you receive a point which you can use to build down a skill tree for one of your SPECIAL traits.

This means that right from the get-go, if you have a strong enough skill, you automatically have access to the higher-tier perks in that skill.

I understand that this a more macro way to go about leveling up, but I welcome it.

Dialogue is handled on the fly

Cutscenes are no longer handled by staring straight into a character’s eyes and submitting dialogue choices. This creates a positive and negative.

Positive – You can move around the world and get immersed while making your decisions. You can walk away from decisions you don’t want to make if you are disinterested.

Negative – Similar to games like Mass Effect, your character is no longer a silent protagonist and will “put words in your mouth”. Selecting an option like “Yes” in dialogue might lead to the character saying something you would not want to say.

I personally feel this is a negative as I want to feel like the one making the decisions, not like a hype man for a named lead.

Create a weapon / Create a town

The “new” in Fallout 4 comes with the addition of the ability to craft weapons, armor, power armor, and even an entire town.

I will admit to getting addicted early on in the building and destruction of the game’s Sanctuary. Gathering followers and breaking down items is fun, and the fact that the game finally rewards the picking up of random crap is nice.

It’s ultimately a distraction rather than an improvement (you can just find better weapons and armor by looking around) but it is not a negative element of the game and is totally optional. 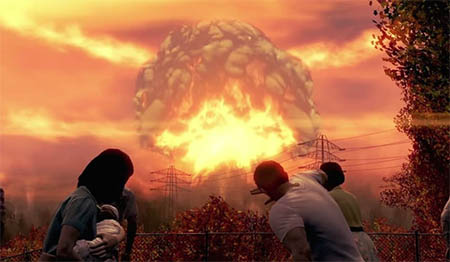 Even though I have had a Playstation 4 since the release of Destiny, I have never been a great judge of video game graphics. In my opinion, graphics peaked two generations ago with the Xbox and Playstation 2. In this generation, games looked really good, but still looked like GAMES.

It was up to the visual artisans to picture the world in the way that they wanted.

[easy-tweet tweet=”Two generations ago, games could not approach photorealism. You know what? I was cool with that.” via=”no” usehashtags=”no”]

Fallout 4 is not the prettiest game I have seen from a technical perspective, but there is a lot going on in the world with fantastic draw distance, and the graphics are passable to me.

Where the game shines is in its portrayal of a dystopian Boston (called Commonwealth) and its many historic areas. The game isn’t as brown and gray as Fallout 3 and features more exciting set pieces (the extra horsepower of modern consoles help).

One slight disappointment is in the radio. Fallout 4 takes many songs from Fallout 3’s Three-Dog radio and adds new tunes to create a much more diverse playlist.

While adding more radio stations and songs sounds like an automatic win, I can’t help but miss the enthusiastic Three-Dog. His personality jumped off the radio station and made it feel like you had a friend in the D.C. Metro area.

Fallout 4 is buggy as hell

Fallout 4 has a lot of bugs at the initial launch, and I’m not talking about the Bloatflies.

Even in the video above, we managed to soft-lock the game twice in a pivotal cutscene near the start of the game and had to replay 10 minutes of Fallout 4. I have also seen issues with audio, subtitles, and some gameplay glitches.

Just like Fallout 3, there is a lot of missing polish surrounding incredible ideas, mechanics, and choice. Hopefully these issues get addressed. I would hate to think there are game-ending bugs in here, but I will be saving often.

What do you think about Fallout 4?

How has your experience been with the recently released Fallout 4? Let us know in the comments below!