It was fifteen years ago that Gruntilda, the haggy villainess of Banjo Kazooie, teased everyone with a third installment of the series. The game was jokingly referred to as “Banjo Threeie,” but it sadly never came to light.

This is because in 2002, only two years after Banjo Tooie was released, Rare was purchased by Microsoft. The move affected the company more than financially. The game focus changed from 3D platformers (Donkey Kong 64, Banjo Kazooie) to child-friendly titles (Grabbed by the Ghoulies, Viva Piñata, Banjo Kazooie: Nuts n’ Bolts).

Naturally, fans of classic 3D platformers (which is almost oxymoronic to say) wanted a return to form. It was disappointing to see their favorite characters tarnished in their newer games.

The fans weren’t alone in their cries. There was a group of internal Rare employees that missed the feel of a good platformer, and they formed a new team — Playtonic Games. Featuring veteran team members like Chris Sutherland (the voice of Banjo) and Gavin Price, the team of N64 Rare employees is poised to do their fans right. 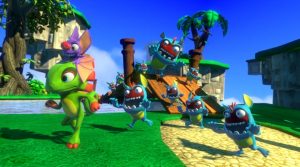 If Yooka-Laylee sounds like familiar, it should. You play as a bipedal iguana (this time without pants) named Yooka and are accompanied by your small sidekick, Laylee.

Laylee is a bat that helps you to fly short distances.

Yooka also has some abilities, like a long tongue, used to latch on to targets like a whip. This will probably be used in both combat and in traversal.

The purpose of the game? While the story probably has not been fleshed out yet, currently the major goal is to collect shiny objects floating in various environments. I couldn’t be more excited.

The game world and the graphics look fairly bland right now, but keep in mind that this was only just announced and only got started a couple of months ago. This will be improved considerably before the launch of the game in October of next year.

The music of Yooka-Laylee

More exciting to me than the new additions is the stuff that will be the same.

Chief among that “stuff” is the music. Specifically, Yooka-Laylee features Rare’s two most legendary composers.

Even more exciting to Banjo fans should be the addition of Grant Kirkhope. Kirkhope has been a cheerleader for Banjo-Kazooie 3 for years and even made appearances in events like Awesome Games Done Quick to express his interest.

You are probably already aware if you are reading this article, but Yooka-Laylee is getting funding help from a recent Kickstarter campaign.

That does not mean that you shouldn’t donate to this title. The team, anxious to provide all it can to its fans, keeps adding new incentives and stretch goals as they make more money. Here is the current list of features that will be included in the game:

If these additions get you excited, you should probably donate. I threw in $23 myself, which is going to get me a digital release of the PS4 version when it arrives in October of 2016 (Yooka-Laylee’s current RELEASE DATE).

Yooka-Laylee feels like the ultimate love letter to Rare fans, and extends beyond the bounds of Banjo-Kazooie.

Yooka-Laylee, a return to form?

What do you think about the new title so far? Did you donate to the Kickstarter? Let us know in the comments below.