Games // We played Super Smash Bros. on the 3DS

Here are our thoughts

Super Smash Bros. 3DS was already launched in Japan. This is great news… for the Japanese. In the meantime, Nintendo decided to keep America temporarily sated by releasing a 24 hour demo only on the 3DS.

We played it. Find out our thoughts on the first live taste of the newest Super Smash Bros.

If Japan having early access to Smash Bros. and all of the content being leaked was a tease, then the demo of Super Smash Bros. for the 3DS is the pinnacle of tease. The demo displays the myriad of fighters that you will eventually have control over when the full version of the game comes out.

All of this being said, the demo only gives you the ability to select five characters. Three of them are mainstays from the beginning of the Smash series.

We played as all three of the old favorites, and we are happy(?) to report that the move set and feel of each character are very unchanged. Many of us played quite a bit of Link in Brawl, so seeing his gale boomerang back in full effect was wonderful.

It does also seem (at least with the first three characters we got to play) that very little has changed in character move sets, which could lead to some already stale characters becoming MORE stale.

Only two new characters are playable in the demo, and they are brawlers who were announced very early in the game’s development.

Mega Man was the most interesting element of this demo.

While it seems like his UP and DOWN A smashes are very powerful, the interesting element of Mega Man is that his SIDE A smashes are projectiles. This is a very interesting new dynamic, as Mega Man seems like a very powerful character. He is best in the mid-range but has plenty of great up close attacks as well. We can see him being a serious force in competitive play. 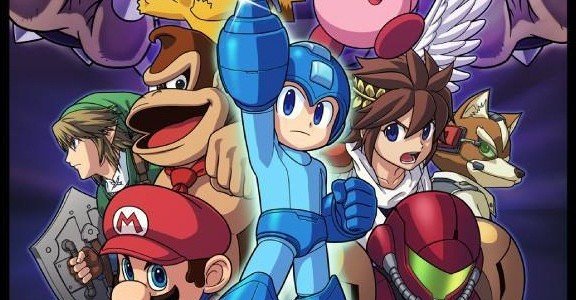 Where Mega Man seems like a good addition, the Villager from Animal Crossing is definitely more of a gimmick character. The moves that Villager uses are filled with wonderful animal crossing nostalgia, but don’t seem to carry a lot of weight. Sure, a Lloid Rocket is cool, but we don’t see how it will be effective come launch.

But the coolest ability the Villager has is the ability to grab items or projectiles that have been thrown at him and then throw them back. In casual play, the villager will definitely be used quite a bit, but I wonder how effective the Villager will be in a tournament or professional setting.

Timber is another interesting move — planting, watering, and chopping down a tree in various stages — but it lends to the gimmicky nature of the Villager and seems like a move that is more trouble than it is worth.

There was only one stage offered in the demo. It was a thrilling new canvas, showcasing the power of the next generation of consoles….

We’re kidding… it was Battlefield… again.

We are not totally bummed. After all, Battlefield is a classic Smash stage — one that maximizes the vertical and horizontal potential of all of the characters while not throwing crap at you from all directions. That being said, it would still have been nice to have a new stage to show us what we are missing by not yet having the title. I could dust off my N64 if I wanted to play Battlefield.

The biggest questions when picking up the demo for most Smash stalwarts is of course the gameplay. Many professional players love the feel of Melee but are less than enthused with the slow, plodding, tripping, stumbling feel of Brawl.

We are happy to report that the new Super Smash Bros. is somewhere in the middle. Gameplay is much faster and less punchy than Brawl, but not as quick as Melee. In Melee, the truly successful characters (other than Peach) were the ones who were blindingly fast (Sheik, Fox, Marth).

There really is nothing that can be said for balance, but this does feel quite a bit like Super Smash Bros of the past, which is obviously a good thing. Move sets for the old characters remain pretty similar and it seems as if old powerhouse moves have been toned down. For example, Pikachu’s Thunder attack seems a lot shorter and a bit less powerful.

Finally, items and final smashes are back and as are overpowered as before. There will still be no items in tournament play. The items we saw in the demo included Bob-Ombs, explosive barrels, and hammers. Final smashes appear to be as crazy, fun, and powerful as ever.

It is no surprise that the demo was great, but it left us wanted much more. The lack of new content is Nintendo’s way of offering a very small taste to keep us excited for a couple more weeks until the game’s official launch. But it looks like more classic Smash Bros., and at the end of the day, that is all we really need.

Did you have a chance to try the demo for the 24 hours in which it was available? Let us know your thoughts below.