When I first arrived at the town of “Hi-Rule”, the name of the fictional town I invented within the first minutes of starting Animal Crossing: New Leaf, I did not know what to expect.

I have never played an Animal Crossing game before, despite the urging of friends and fans. Since the first game was released in 2002, I have always avoided what I instinctively believed to be a “gamier” version of The Sims for the PC. I personally have never been a major fan of titles that have no ultimate goal. So naturally, a game like Animal Crossing never exactly got my blood pumping, from the conceptual level.

I was as surprised as my avatar, “Zick”, when I discovered that I was to be the new mayor of Hi-Rule. And like Zick, I was just as astonished to find myself thoroughly enjoying my time in this cuddly world.

Before I get into the review, I would like to address what makes this variation on the classic Animal Crossing gameplay different than the others. Animal Crossing: New Leaf adds some new characters to series. Alpaca llamas named Reese and Cyrus run the games resale and flea market store, Re-Tail. And there is a new secretary named Isabelle. Isabelle is a lovable new animal that acts as the second-in-command to the mayor of the town. She gives new meaning to the phrase, “working like a dog.”

The new element to the series is the addition of the player character as the mayor of the town. This gives you responsibility of running the town and keeping the townsfolk happy. Making the animals happy, pulling weeds, and planting trees has never been a more necessary part of the gameplay.

Old players may say, “what’s the big deal?” After all, part of the appeal of the series is town upkeep and helping out other characters. And who needs a new mayor? There was a lovable tortoise running the show before the shift.

Well it turns out that Mortimer is retired and living on an island now, so it is up to the player to take over and make the town a better place to live.

And how do you improve said town? Well, New Leaf gives the player a few new tools to use as mayor of the town.

Public Works Projects enable the mayor to add facilities to the town to increase the value and happiness level of visitors and residents. Here, the mayor asks the townies for funding to help develop the necessary projects. I think we can all rest easily tonight, knowing that our video games FINALLY have tax laws. These works projects can be as basic as installing street lights or as involved as building police stations.


Town Ordinance is the answer to busy players like myself who cannot possibly give the attention needed to their little forest town. Ordinances change the town dynamic. Of particular value to me is the “Night Owl” ordinance, which forces shop owners in the game to stay open later than usual, giving nocturnal folk time to shop until they drop.

So what makes this game so much fun? I don’t know.

New Leaf has that Nintendo charm. Every character is a special addition to the town and has a lot of personality. Roscoe the Horse is better than you and he knows it. Isabelle is always freakishly running around, explaining how nice the one hour of sleep she received last night felt. Chester loves cake. A lot. It is easy to fall into the role as mayor with these exuberant personalities. It feels like managing demographics and psychographics in a real city environment.

And it is a lot of fun at first, but it also stands the test of time.

The longevity of the game comes from all of the random elements. A game with a persistant offline world is only fun with a lot of random elements. Characters want random things. Shops will carry random goods. Tom Nook, your private loan provider (You mean this game has taxes AND credit lines?? Oooooo!) and sales raccoon, has random new upgrades and furnishings for your space. All of this stuff changes with the time of day, the given month, or even the different seasons.

With the added responsibility of running the town, the game is poised to stay in your console for a long time. In fact, I recommend downloading the game to the 3DS so that is always within reach as a pickup and put down type of experience.

As a pickup type of game, it also has the value of being a great escape. Every piece of the game is so freaking adorable that it is a good solution to the train ride home, the laundry day, or the lunch break. For this alone, I almost whole-heartedly recommend purchase. 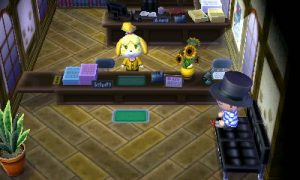 All of this charisma is indicative of how fresh this experience is to me. This game is definitely made for those with no prior Animal Crossing experience. In talking with friends who have played a good deal of Animal Crossing, this game is made to feel tired.

In one particular conversation, a friend was giving advice on all of the characters as if he had played the game before. He hadn’t. This information was as broad as “where to plant trees” and as specific as “how to bond with Sable Able, the sewing hedgehog”.

Therefore, if you have extensive history with the series and are looking for a grand evolution, look elsewhere.

Put on the glasses

So after discussing the one-dimensional gameplay and two-dimensional characters, it is time to talk about the three-dimensional element. Put simply, Animal Crossing does not need to be put in three dimensions, though I feel the handheld space is the best fit for a game like Animal Crossing.

Unlike Luigi’s Mansion: Dark Moon, which had a cool look in 3D, Animal Crossing does not really need the viewpoint to express anything. I left it off in my time playing, which I guess is good for the battery?

Animal Crossing: New Leaf is the perfect addition to the library of any 3DS owner with a passion for Nintendo titles and a lack of experience with the series. If the series has been getting stale, this may not be the right time to jump back into the apple trees or raging rivers of your “Hi-Rule”. 🙂 🙂 🙂

But that’s not all!

I want this to be not only a review of Animal Crossing: New Leaf but also an exploration of what can really make the town sing. Here are a couple tips:

To truly be successful, you want to sell turnips. Every Sunday, from 9-12 in the morning, you can purchase turnips from a bovine for a certain amount of money per turnip. Like the stock market, be risky and it will pay off. At around or under 100 bells, buy as many turnips as you possibly can.

Throughout the week you can check in everyday to find out what Re-Tail wants for turnips. If the price is a decent amount higher (Upwards of 120 Bells), sell those suckers for massive overall profit. 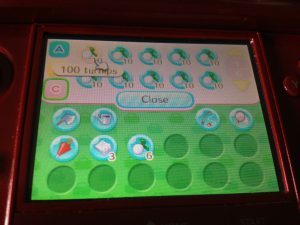 What is your favorite song in Animal Crossing?

Every hour, a song specific to that hour plays, and it changes with the hour as the town bells ring.

My favorite song is 11PM for both comfort and tone reasons. For one, this is the perfect end to a long day with the tranquility in the guitar. It is also simply one of the more strongly written songs of the game.

Close second choice is the daytime city shopping center theme, which is super cheerful. Also, it is not an hourly theme so I hesitated when including it here.

Your tips and tricks

So what have I been doing wrong and what should I be focusing on? Let me know what tips typically work well in the Animal Crossing universe in the comments below.